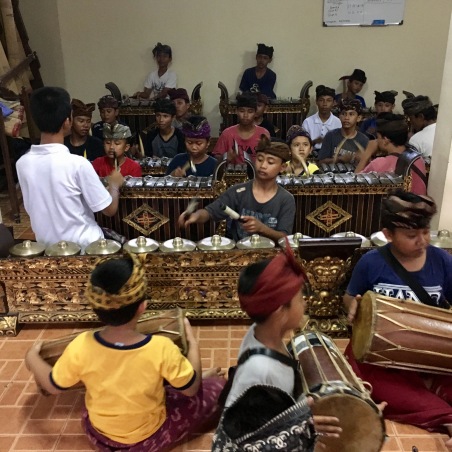 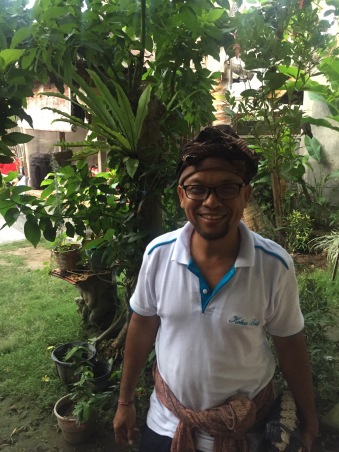 As published in Bali & Beyond Magazine April 2017  issue. Download the article here

A gamelan melody reverberated from a house in a small alley in Batu Bulan in Gianyar. It was already past five o’clock in the evening and the neighborhood has gone quiet as it was almost dusk. But as I walked into the house number eight, the sound of the gamelan was getting stronger, making the house feel alive. It was as if there was a party.

The lawn was packed with motorcycles, while the front porch was swarmed with piles of sandals that are mostly in small sizes as they belonged to the children. The front gate had a sign that said “Bali Ceraken”. Inside, around 20 kids of all ages sat cross-legged behind a gamelan instrument. Their hands were dancing as they hit the metal bars on their metallophones using mallets.

A traditional musical ensemble, gamelan is made up of percussive instruments including metallophones, xylophones and kendhang (traditional drums). Each produces different tunes, yet they all create a hypnotizing symphony when played together.

Amidst the gamelan sound, a man sat calmly in front of the ensemble. He closed his eyes while his udeng (a Balinese head cover for men) was bobbing up and down as his head was moving in accordance with the melody. Once in a while, he shouted an instruction and corrected his students’ movements. The man is Made Subandi, the founder, patron and head instructor of Bali Ceraken.

Made Subandi may seem down to earth from the outside, but this soft-spoken man is actually one of Bali’s most prominent musicians. Not only a local gamelan player, Subandi is also a well-known international composer who is sought after throughout Bali and across the world. His innovative compositions blend traditional tunes of gamelan with modern music. He has performed in international worldmusic festivals and has traveled the world as a guest teacher to instruct gamelan, including at Gamelan Sekar Jaya in the USA.

Due to his love for Balinese music, Subandi has created Bali Ceraken, a studio where Balinese children learn this traditional orchestra. Through Bali Ceraken, he nurtures the young talents. And as the children progress in their musical levels, some are being invited to perform with him in a number of international music festivals. “I first started Ceraken at my home village in Batuyang with my brother. Together, we gathered local children and started teaching them gamelan for free,” explained Subandi.

The studio has been running for 12 years with students coming not only from the neighboring villages in Batu Bulan but also from other parts of Bali including Klungkung, Sanur, Ubud, and as far as Karangasem. Five to 15-year-old children venture the long journey every Thursday, Saturday and Sunday to learn gamelan straight from the master.

The students for the evening session are mostly boys, however Subandi explained that girls are also very much welcome in Ceraken. The young girls are mostly interested in learning the gender which is held every Sunday morning. Gender is originally a masculine type of gamelan ensemble to accompany a wayang (shadow puppet) performance. However, now gender is becoming more and more popular among the girl students.

While we were talking, a couple of kids wearing black T-shirts, sarongs and udeng came rushing into the house, throwing their sandals off as they went in. They were late for this session. In a hurry, they kissed the hand of Made Subandi as a token of respect. Subandi calmly welcomed them and asked them to take their place in front of their assigned percussions. Within minutes, those little children listened to the ongoing melody and soon started to pick up the rhythm and play the instruments flawlessly as if they had been joining the ensemble from the beginning.

Gamelan usually consists of more than ten instruments playing at once in an ensemble. And unlike other modern musical instruments, gamelan does not follow numbered musical notations. It is passed down from generation to generation by mouth-to-mouth and is traditionally not notated. Therefore, the most important requirement to play gamelan is to have sensitive ears.

Subandi began explaining to me the system of gamelan. He then let me try playing the metallophones. His only remaining instruction was to listen and follow the tunes – which was not that easy. The children were giggling as I was playing the gamelan and missing the tunes. Gamelan is definitely hard to master, and so I was pretty impressed when I found out that one of the students, Cok Damar who was only six years old, has gone from a beginner to group A which is for the senior players, in just six months. “What is your secret in mastering the art of gamelan?” I asked Cok Damar. He said, “Just play. I like it because it’s fun.”

Indeed, fun is the core essence of learning gamelan. I could see the children were giggling and smiling as they hit the instruments and play their part in the ensemble. Their bodies were moving in line with the melody. It was obvious that they really enjoyed playing the music.

Gamelan without a doubt is an integral part of Indonesian culture. A variety of gamelan can be found in other parts of Indonesia, including Java, and each different area has a different sound, repertoire and instruments. For instance, the Javanese gamelan has a slower rhythm, while the Balinese gamelan sounds stronger with frequent rapid changes of tempo and dynamics.

Unfortunately, just like any other old traditions, this intricate art is starting to vanish in this modern era. That’s why Made Subandi created Bali Ceraken as a way to preserve this dying art. “Bali Ceraken was not established to make money or to launch the next Balinese musician. It is rather to preserve the Balinese culture,” Subandi explained amidst the clamoring sounds. Bali Ceraken is run by donations. Each child pays a small sum of tuition money of Rp. 25,000 or about US$2/month to learn at Bali Ceraken. Most of the gamelan instruments are privately owned by Made Subandi or were donated by art-patrons.

Pure passion and determination – those are the two reasons that drive Made Subandi in running this studio. If he’s not performing at music festivals around the world, Subandi teaches these children personally. And when he is absent, his talented mentees will take over the class. Many of his students are studying at the gamelan senior school named Sekolah Menengah Karawitan Indonesia (SMKI). These senior students from SMKII will patiently teach the younger children at Ceraken when Subandi is away.

These seniors often play along with the younger students and give them directions on which metal bars to hit to follow the symphony. Many of the seniors have also become professional musicians and joined Subandi performing in music festivals. “There is more and more interest in gamelan. I surely hope that this art will always continue to live,” said Subandi.