As published in The Jakarta Globe Newspaper:

A massive plume of white smoke soars high above me. Sweating and panting, I feel awe and inspiration swelling as I climb higher and closer to the source.

The sun is sizzling and the heat from the caldera has me breaking into a sweat. My feet, like the rest of the island, are blackened with dusty volcanic soil. I am at the world-famous island of Krakatau.

A place of legend in the volcanic history of the modern world, Krakatau’s, or Krakatoa’s, colossal eruption back in 1883 killed approximately 40,000 people. Its volcanic ash was said to have spread through the Earth’s atmosphere, creating spectacular sunsets around the globe for more than two years.

The entire volcano was destroyed in the gigantic explosion. Soon afterward, however, a new volcano emerged from the sea which has since become known as Anak Krakatau, or the Child of Krakatau.

Located in the Sunda Strait between the islands of Java and Sumatra, Krakatau is easily accessible from Jakarta. Two options are available, depending on the depths of your pockets. You can take a boat from Anyer or Carita beaches in West Java, a more comfortable option that requires more money. Or you can take the ferry from Lampung in South Sumatra. I took the second option, for what I call obvious budgetary reasons.

The journey was long but adventurous: a three-hour van ride from Jakarta to the Merak port, followed by a two-hour trip across the Sunda Strait to Lampung by ferry. You will be accompanied the entire way by a karaoke system booming Indonesia’s popular Indian-inspired dangdut music. From there, it was just another half-hour van ride to Kalianda, a sleepy seaside town in Lampung, where I rented a boat to Krakatau. 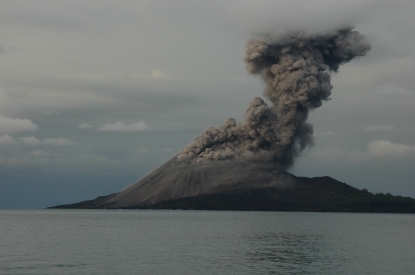 Sharing a boat with 10 other travelers, I sailed from Canti port in Kalianda to Sabesi Island, the island closest to Anak Krakatau, and our base camp for the night. There are no luxury hotels or resorts on Sabesi, but finding accommodation is relatively easy as locals are always willing to rent their houses to visitors. For extremely low-budget travelers or adventure addicts, another option is to bring your own sleeping bag and throw it under the island’s pendopo (open air pavilion). It’s an option that is preferred by the many hungry mosquitoes that live there.

The next day, we found ourselves well-rested from our long journey from Jakarta, knowing we were ready for our real adventure — to Krakatau. We just needed to take one last boat trip from Sabesi to Anak Krakatau. It was a beautiful day with sunshine, a cool sea breeze and calm waves. I settled myself in the front deck of the “cruise ship,” or to be precise, a traditional wooden fisherman’s boat, where the only safety measure was having an expert captain.

One and a half hours later, Anak Krakatau emerged on the horizon. Its ash-covered body rose against the blue sea with white smoke escaping ominously from the crater. I gasped, eyes locked on the volcano in astonishment. Krakatau’s reputation precedes itself ­— what is supposed to be the mere remains of the original volcano exudes the aura of terror that once shocked the world.

Our guide, Budi, said the volcano was at a “Level 2 warning,” which meant it was still relatively safe to visit. But Budi said we needed to be alert in case of a possible eruption. I have to admit that even this minor warning got my adrenaline flowing.

By the time our boat moored at the black beach of Anak Krakatau island, everyone jumped out of the boat in all directions, excited to finally touch dry land. I took off my flip-flops and tried to feel the black, volcanic earth beneath me.

From above, a steady shower of ash dusted us like snow, covering every tree, stone and patch of land and turning the island into a monochromatic painting. While Krakatau has not had any major eruptions in recent years, it is still active, with hot gases, rocks and lava spewing periodically from its brim.

As we walked further onto the island, we were welcomed by a rock decorated with a sign that read, “Cagar Alam Krakatau,” (“Krakatau Nature Reserve”).

Krakatau falls within Ujung Kulon National Park, an area recognized as a Unesco World Heritage Site that stretches from the west coast of Java to the south of Sumatra. To visit Krakatau, visitors need to obtain a permit from the Natural Resource Conservation Office (BKSDA) in Lampung.

Crowding the sign from behind was a lush forest growing in the immensely fertile volcanic soil. We trekked through this prehistoric-looking jungle to reach the mountain. While it was interesting to explore the jungle and its unique vegetation, I couldn’t help but wonder why we weren’t seeing any animals.

I spotted a few spiders and crabs, but otherwise the island seemed eerily uninhabited. Biologists have debated whether the neighboring islands were completely sterilized following the devastating 1883 eruption, and research is continuing to investigate surviving species in the Krakatau area.

Under the deluge of ash, the path to Krakatau turned into a sandy black hill. Climbing the slope may look easy, but it was very tiring. After an hour of hiking, we reached the border beyond which only rangers are permitted. I felt an immense sense of wonder from being so close to a vein leading to the very core of the planet.

The smell of sulfur dominated the air as we approached the caldera, and a solid cloud of smoke rose in regular intervals, blasting heat and dust in my face. It was a truly awe-inspiring moment with these entirely otherworldly phenomena surrounding me. I was humbled as I understood that humans are so small and insignificant; how easily we can perish, especially at the hands of nature.

But since no one wants to feel gloomy (or existential) on vacation, the next activity on our itinerary was snorkeling. Given the location, the waters surrounding Krakatau are unspoiled, with well-preserved coral and an abundance of tropical fish.

Numerous virgin islands are scattered around the area, offering endless alternatives for snorkeling. Krakatau gave me one of the best snorkeling experiences I have ever had in Indonesia.

The translucent water, the vast swathes of ecosystems and the calm, unpopulated atmosphere of a private island added to the meditative experience. As if to crown my experience, I met several “Nemo” clownfish swimming around (perhaps he was on the way to meet his father).

Since Krakatau and its people gave us many splendid holiday memories, we wanted to give something back. We brought along some used books for the local kids, and on our last day on Sabesi we explored the island, and spent time reading with the kids in an open-air field in the middle of the village.

It was inspiring to see the kids get excited over their “new” used books. Their eyes wandered in delight, skimming every page of my old Bobo magazine. It was a humbling experience for any of us who took our privileged lives for granted.

Sabesi is only eight hours away from the metropolis of Jakarta, but life here is a world away.