As published in The Jakarta Globe Newspaper: 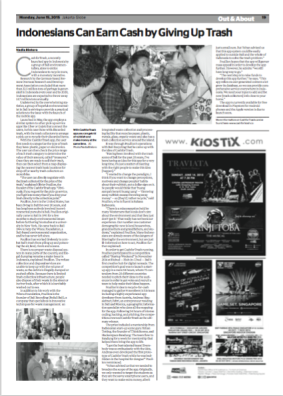 Jakarta. CashforTrash, a recently launched app in Indonesia by a group of Bali environmentalists, aims to entice Indonesians to recycle more, with a monetary incentive.

Research by the German-based Bremen Overseas Research and Development Association concluded that more than 22.5 million tons of garbage is generated in Indonesia every year and by 2020, Indonesians are expected to throw away 53.7 million tons annually.

Undeterred by the overwhelming statistics, a group of hopeful environmentalist in Bali is striving to provide a practical solution to the issue with the launch of the mobile app.

Launched in May, the app employs a similar system to other pick-up service apps like Uber or Gojek that connect the users, in this case those with discarded trash, with the trash collectors to arrange a pick-up to recycle their discarded items.

With the CashforTrash app, the user first needs to categorize the type of trash they have: plastic, paper or electronics. The user can then check the price range of each trash category to determine the value of their amount, called “treasures.” Once they are ready to sell their trash, they can then select from a map displaying the nearest trash bank locations for drop off or nearby trash collectors on motorbike.

“The user can directly negotiate with the [trash collector] for the price of the trash,” explained Olivier Pouillon, the founder of the CashforTrash app. “Obviously, if you request for the pick-up service, you’ll get less money than if you drop your trash directly to the collection point.”

Pouillon, born in the United States, has been living in Bali for over 20 years, and has long been actively involved in environmental pursuits in Bali. Pouillon originally came to Bali in 1991 for a few months to study environmental issues before furthering his studies at a university in New York. He came back to Bali 1994 to help the Wisnu Foundation, a Bali-based environmental organization, and he has never left since.

Pouillon has worked tirelessly to combat Bali’s trash from piling up and poisoning the air, land, rivers and oceans.

There is no proper waste disposal system in many parts of the country, and illegal dumping remains a major issue in Indonesia, explained Pouillon. The refuse collection and disposal services are unable to keep up with the volume of waste, so the debris is illegally dumped or pushed offsite. Because there is limited trash collection infrastructure, people also dispose of their waste in the street or in river beds, after which it is inevitably washed out to sea.

In addition to his work with the Wisnu Foundation, Pouillon is the founder of Bali Recycling (Peduli Bali), a company that specializes in innovative techniques for waste management:  an integrated waste collection and processing facility that recycles paper, plastic, metals, glass, organic waste and also has a trash collection service around the island.

It was through Pouillon’s operations with Bali Recycling that he came up with the idea of CashforTrash.

“Having been involved with the trash scene of Bali for the past 20 years, I’ve been having an idea for this app for a very long time, it’s just a matter of meeting with the right people to make this idea [happen].”

“I wanted to change the paradigm, I think if you want to change perceptions, motivate and change peoples’ habits about their rubbish, put a dollar sign on it. So people would think that ‘buang sampah berarti buang uang’ — ‘throwing away rubbish means throwing away money’ — so [they’d] rather recycle,” said Pouillon, who is fluent in Bahasa Indonesia.

“There is a misconception held by many Westerners that locals don’t care about the environment and that they just don’t ‘get it.’ That really has not been our experience. Our number one customer demographic now is local housewives, grandmothers and grandfathers, and students,” explained Pouillon. Many Indonesians are already aware of the dangers of litteringfor the environment, but are just ill-informed on how to act, Pouillon further explained.

In order to get CashforTrash running, Pouillon participated in a competition called “Startup Weekend” in November 2014 at Hubud — Hub-in-Ubud — Bali’s first creative hub for digital nomads. The competition’s goal was to launch a start-up app in a mere 54 hours, where 75 contenders from 20 different countries needed to pitch their ideas to the audiences in order to get votes and recruit a team to help make their ideas happen.

Pouillon’s idea to recycle-for-cash managed to gather 8 members in his team including a highly experienced app developer from Austria, Andreas Hausleitner, Febri, an entrepreneur residing in Bali and Monica, a geographic information specialist who does all the mapping for the app. Following 54 hours of intense coding, hacking, and pitching, the competition crowned CashforTrash as the ultimate winner.

The prize included a mentorship from Indonesian start-up scene guru Yohan Totting, the founder of ThinkRooms, and Hackerspace Bandung. The team flew to Bandung for a week for mentorship that helped them bring the app to life.

“I got the best talented team! Everybody was so enthusiastic with the idea, Andreas even developed the first prototype of CashforTrash while he was bedridden in the hospital for dengue!” Pouillon reminisced.

“Yohan advised us that we needed to broaden the scope of the app. Originally, we only wanted to target the students as they are the savvy smartphone users, and they want to make extra money, albeit just a small sum. But Yohan advised us that this app system could be easily applied to outside Bali and the whole of Indonesia to solve the trash problem.”

Pouillon hopes that the app will garner mass appeal in order to develop the app further. However, he admits: “we still have long way to go.”

“The next step is to raise funds to develop this app further,” he says. “This app relies on user generated content a lot grow its database, so we can provide comprehensive service everywhere in Indonesia. We need your input to add and list new [trash collectors] info close to your home.”

The app is currently available for free download in Playstore for Android phones and the Apple version is due to launch soon.