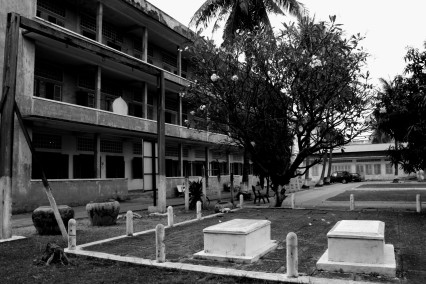 It was a hot day in the Cambodian capital of Phnom Penh when I
made a trip to the notorious museum Tuol Sleng Genocide Museum.

The Museum, also known as S-21, is a complex made of four main buildings. It used to be the Chao Ponhea Yat High School before the Khmer Rouge took over after emerging victorious from the 1975 civil war.

Under the Pol Pot regime, the school become a detention center. People accused of plotting against the government were tortured here to extract confessions from them. it was in the operation for four years until the Vietnamese took over Cambodia and eventually turned the prison into a museum. Now, it serves as a sad reminder of one of the darkest histories of mankind.

The museum is a short tuktuk (motorcycle-drawn carriage) ride away from downtown Phnom Penh. At a distance, the place looks peaceful, if not deserted.

But the mood changed as soon as I alighted from the tuktuk. It almost seemed as if there were invisible walls that separated the horrors of the former prison from the more comforting realities of the outside world.

In what was formerly the high school playground, one can now find 14 coffins among the frangipani trees. These hold the remains of inmates who were hastily murdered by fleeting guards hours before Vietnamese troops discovered the prison in 1979.

In Building A, I saw what used to be rows of classrooms converted into torture chambers. There were bare chambers, save for a rusty bed frame in the middle, beneath a black-and-white photo of how it was found more than thirty years earlier.

There were also photos of prisoners chained to the bed, tortured and mutilated, as well as scenes of execution and body exhumation from mass graves.

Building B hosts the majority of about 6,000 black and white photos left from the nearly 20,000 mug shots of detainees. There were men in berets, women, young boys and girls staring bleakly from the walls, even a women holding a baby in her arms. On one wall is a paining that depicts what happened to the infants at the prison – they were killed with bamboo spears and buried in mass graves. 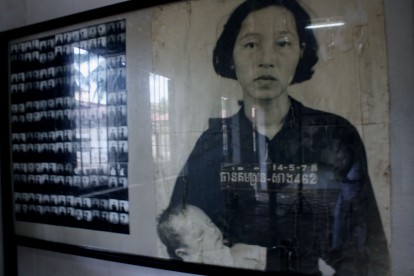 In Building C were more bone-chilling exhibits. The classrooms had been partitioned into narrow cells where the prisoners could not even lie down. The residents of these small cells were shackled to the walls or to the concrete floor. Those in the detention hall were chained in rows.

The exhibits bore the sign “No Touching”. This was hardly necessary though, in the light of what one can witness at the museum.
Upstairs, there were photo exhibits by Swede Gunna Bergstorm. He was one of the first foreigners invited by the Khmer Rouge as part of propaganda efforts. Bergstorm took a guided tour of Cambodia in 1978 and reported only positive aspects about the country. His photographic exhibit captured the propaganda that concealed the truth of the time.

Further adding to the museum’s heartbreaking exhibits are what looking like goal posts in another open area. The torture implements were originally used as gymnastics equipment for students. Prisoners were once hoisted on ropes and dunked head first into fetid water in the big drums underneath the posts to force them to give up names of family members and relatives who were later arrested.

Buidling D houses even more horrific reminders of the past. There were shelves of skulls and bones – some cracked, others broken – a testimony to the torment inflicted on the detainees of Tuol Sleng. Approximately 300 pieces of skulls and bone were used to create a model of Cambodia. The macabre map was dismantled in 2002.

At the end of my visit, I felt both physically and emotionally drained. The exhibits provided a slide of what life used to be like for a visitor like me who had no previous knowledge of Cambodian history. But for Cambodians, the place has acquired the status of a shrine, where a visit is akin to a pilgrimage of one of the darkest chapters in the country’s history.

As published at The Jakarta Globe Newspaper, 3 March 2010